One of the first schools of embalming in the United States and certainly in the South and Southwest was organized in Dallas, Texas, at the turn of the century and was called the Barnes School of Anatomy, later to be called The Dallas School of Embalming. In 1945 The Dallas School of Embalming was succeeded by Dallas Institute of Mortuary Science founded by W.H. Pierce and L.G. Frederick. Dallas Institute of Funeral Service represents the school with the longest continuous operation under the same general management of any funeral service educational institution in the United States.

Dr. Carl Barnes, a well-known medical expert, founded this school in 1900 and called it Barnes School of Anatomy, Sanitary Science and Embalming. Professor Hood F. Smith directed the school, under the supervision of Dr. Barnes, until 1908 and then assumed full charge. He was assisted by Professor Will Dwyer. At that time, the name was changed to the Dallas School of Embalming.

In 1925, following the death of Professor Smith, Professor Dwyer assumed active charge of the college and appointed L. G. "Darko" Frederick as his assistant. This arrangement continued until 1936 when Frederick became a part of a private funeral supply organization. 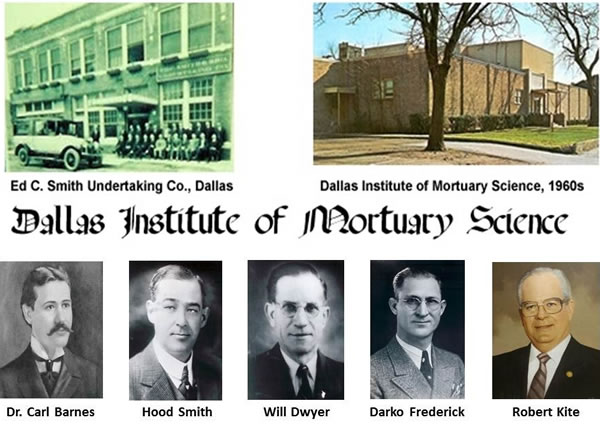 With the death of Professor Dwyer in 1945, representative members of the funeral service profession recognized the need for continuing such a school to serve this area. W. H. Pierce and L. G. Frederick accepted the responsibility and created a partnership known as Dallas Institute of Mortuary Science, and Mr. Frederick was appointed full-time director and administrator of the college. 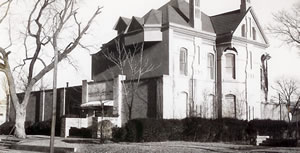 On April 1, 1963, Dallas Institute of Mortuary Science was converted to a non-profit corporation under the laws of the State of Texas. Its purpose was to engage in all activities necessary, useful or expedient to promote and further the interest of mortuary education, being primarily concerned with educational skills, scientific research, and dissemination of the research results and teaching embalming of the human dead. Its primary purpose was to conduct a school to teach the business and profession of funeral service as well as educational instruction in all the arts and sciences and other subjects as recommended by the Board of Trustees and the accrediting agencies that were concerned with the funeral profession.

The original Board of Trustees consisted of W. H. Pierce, Chairman; L. G. Frederick; Paul Bollman; Robert Kite; and Floyd Owens. Mr. Frederick was elected president of the college and Robert Kite dean. Upon the retirement of Mr. Frederick in 1963, Mr. Kite was elected president of the college and served in that responsible office until his retirement in 1992, at which time James M. Shoemake assumed the office of president.

In 1972, the Kentucky School of Mortuary Science in Louisville, Kentucky, became a part of the organization and in 1978 was joined by the Indiana College of Mortuary Science, which was then located in Indianapolis, Indiana. At this time the non-profit corporation was changed from Dallas Institute of Mortuary Science to Pierce Mortuary Colleges, Inc., and each of the satellite schools assumed its individual identity. Accordingly, Dallas Institute of Funeral Service became one of several colleges, each of which was independent of the other, but a legal part of the non-profit corporation known as Pierce Mortuary Colleges, Inc.

After many years in the same location on Worth Street, the need for a larger campus and a more modern building became obvious to the Board of Trustees. September 1983 was the date selected for the Dallas Institute of Funeral Service to move from the old facilities to the beautiful new building at 3909 South Buckner Boulevard in Dallas. In 1995, in an effort to maintain state of the art facilities, a major renovation and addition project was completed. The school sits on a developed campus of three acres.

In 2018, after having lead Dallas Institute for twenty-six years, James M. Shoemake retired as president.

Under his leadership, the institution experienced a significant increase in retention and graduation rates, strength and reputation.  Shoemake made key additions to its academic offerings, as well as introduced a robust online, distance-funeral service education program. His tenure was marked by his high standards, integrity, exemplary reputation, and continuous improvements and will define the college’s culture for years to come.

His successor, Wayne Cavender assumed the presidency in May 2018.

Dallas Institute of Funeral Service is accredited by the American Board of Funeral Service Education, the official accrediting agency for funeral service education as recognized by the United States Office of Education. The college is an active member of the National Associated Colleges of Mortuary Science, Inc. Eligible students attending the college may receive financial assistance from a number of agencies, including Veterans Administration, Vocational Rehabilitation Commissions, and U.S. Department of Education in the form of federal student loans, Pell Grants, veteran’s training, and vocational rehabilitation training.

Dallas Institute of Funeral Service has a rich history and tradition, and its success can well be measured by the number of successful funeral directors who are alumni and have proudly given much credit for their training to this institution.